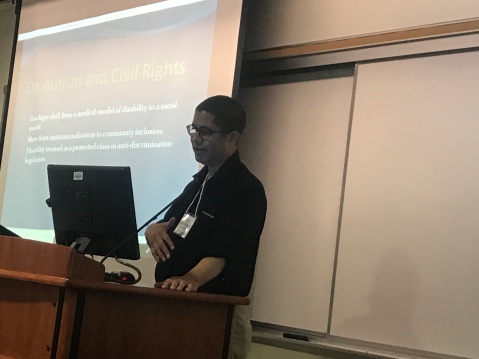 Gyasi Burks-Abbott is a librarian, writer, public speaker, autism self-advocate and a fellow with Leadership Education in Neurodevelopmental and Related Disorders (LEND), a nationwide training program including 52 locations across the nation, designed to improve the health of infants, children and adolescents with disabilities.

In his talk on Autism and Civil Rights, Gyasi shares a timeline depicting the slow paradigm shift from a medical model of disability to a social model, and from institutionalization to community inclusion.

The beginning of this shift is evidenced in the 1970s, in the following timeline, as disability begins to be treated as a protected class in anti-discrimination legislation: